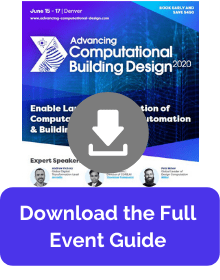 If you’re reading this, chances are your firm has adopted and implemented computational design.

At least on some projects, at least some of the time.

Until recently, computational design was something that resided quietly in the corner of the office until it was called upon for deployment on a project or a team.

While this describes how computation remains underutilized in a minority of architecture, engineering and especially construction firms, the good news is that every day, with every new project and project team, computation has become a mainstay – increasingly embedded in projects, with computational designers increasingly engaged with teams.

That said, computational design tools remain in most firms laggards when compared with BIM tools and work processes.

When computation goes mainstream, we will no longer need to describe how it works.

Any more than we currently have to explain how parametric tools work.

When computation goes mainstream, we will no longer feel compelled to explain how it can save time and, therefore, money.

This will just be a given.

When computation goes mainstream, we will no longer need to justify its application on every project.

Having earned its weight in gold again and again.

Having come to the team’s rescue when in a pinch.

Having won clients over while being interviewed.

When computation goes mainstream, our work will be far from over.

We will just be able to focus on what matters most – getting work done.

Only faster, less expensively, of better quality, and better for the environment.

For when computation goes mainstream, we won’t need to wait in the wings for an opportunity to shine, nor sit on our hands until a project leader or firm principal comes around to see things the way we see them.

Gratefully, it won’t be long (hallelujah) before computation goes mainstream.

But until that day comes it will remain selectively implemented on projects.

Computational design will remain seen an expense – a cost, not a value-added – to projects, and thus a drain that requires near constant championing and convincing.

Until that day, computational design will lie dormant.

On the bench. A bench player scratched from the lineup – instead of playing every day.

Because we know what computational design is capable of (and the design technology specialists who work their magic are truly 5-tool players, all) its hard for us to see the power-hitting tools sitting on the sidelines when they could be contributing daily.

Because computation wants to be in the game – and play.

Enabling large-scale adoption is the theme of ACBD 2019.

Computational design needs to become more widely recognized, accepted, and most importantly, utilized whenever it can add value to projects and the firms and teams that run them.

Which is always – or almost always – but not everybody is on board with that.

Until that day comes, we all need to become better at…communicating.

You know what design technology is capable of.

But can you put it into words that others understand, appreciate and absorb?

For computation to go mainstream, we all must collect success stories, then pull them out and tell them – compellingly, convincingly – whenever we see an opportunity for the tools to do their thing.

For computation to go mainstream, we need to find ways to move from people telling you to do your thing to doing our thing – by owning not just the tools, but also the process.

For computation to go mainstream, it needs to be seen as a go-to tool and work process in a variety of project phases.

And we are the only ones, for now, who can show how this can be accomplished.

We are the only ones who can demonstrate ROI on computation.

And demystify its functionality.

And show non-technical designers not only how it’s done – but why it’s done.

And show our higher-ups that the tool’s user-interface doesn’t have to be difficult to use or obstinate.

And do this while the firm meets its deadlines and achieves all its other goals.

This is on us, because we are the only ones who have both the necessary skillset and mindset.

We get it. That’s both our gift and, for now, liability.

Or at least our challenge.

But more importantly, it’s on us because we know that computation is an inevitable change for the profession and industry.

Not everybody recognizes this. But we do.

That the only risk is to not implement computation now so that it becomes second nature.

That by not implementing computational design our firms risk being left out.

On the bench. Sitting out project after project.

Playing in the minors instead of the majors.

For computation to go mainstream, it’s up to us.